In the fountain pen world, Kaweco is probably best known for its Sport range of pens.  Renowned for their small, portable size when capped, but fully functional when posted.  True pocket pens.  Not content with this achievement, Kaweco went a step further and introduced the Liliput – a pen with smaller vital statistics, but arguably even more charm.

I own three of these diminutive delights and I’ll talk more about them in another post.  The purpose of this post is to introduce the first converter designed specifically for the Liliput.  Up until now, one notable constraint of the Liliput has been the fact that its size means that it can’t accommodate a converter and has to run on short international cartridges.

The good news is that the converter for the Liliput is cheap – around £2.50 in the UK ($3 in the US).  I got mine from Cult Pens, but Bureau Direct and Andy’s Pens in the UK also sell them.  In the US, you can get one from Jet Pens or Pen Chalet. 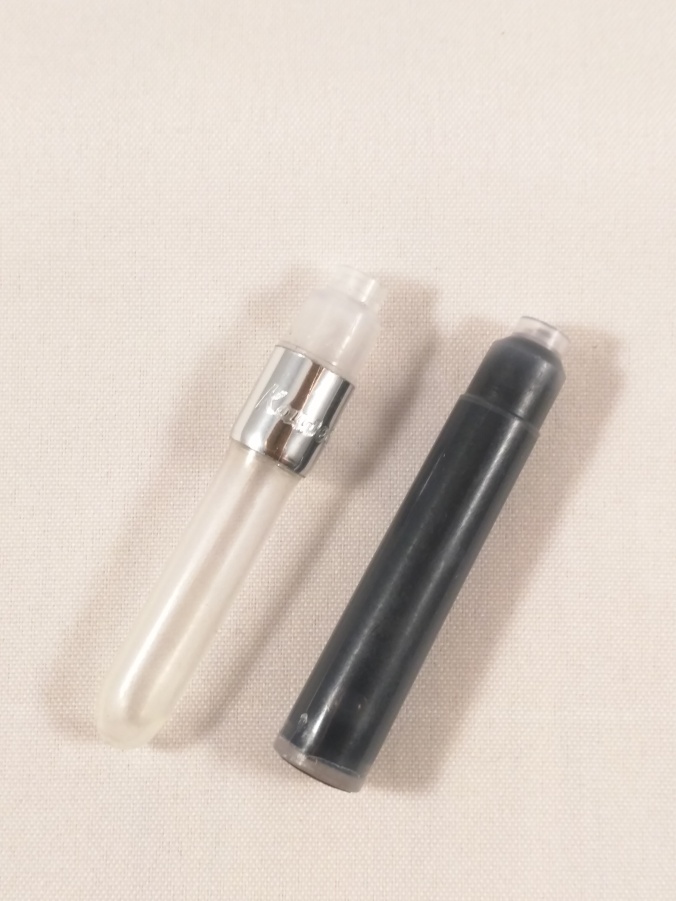 Liliput converter with an international short cartridge for comparison

I think it’s fair to say that the converter won’t be winning many design awards.  It’s functional, but no great looker.  The adaptor end is made of polypropylene or a similar plastic.  I haven’t been able to figure out what the soft flexible material is that makes up the bulb, but it does what it is supposed to.  The two elements are joined by a metal collar, engraved with the Kaweco name.

To some extent it reminds me of a stripped-down old school Parker bulb filler, minus its metal frame. 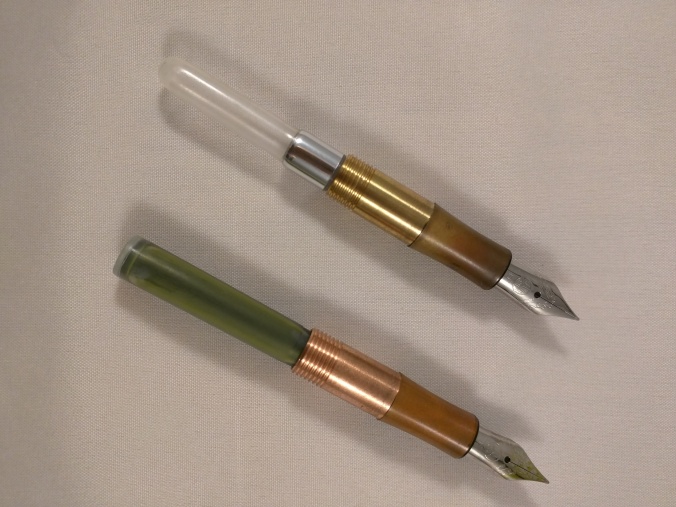 Converter vs cartridge – Brass vs Copper

It’s not perfect in use, but let’s face it, the reason for buying this is to use bottled ink in a pen that was previously off-limits.  As such I suspect most people will live with the shortcomings. 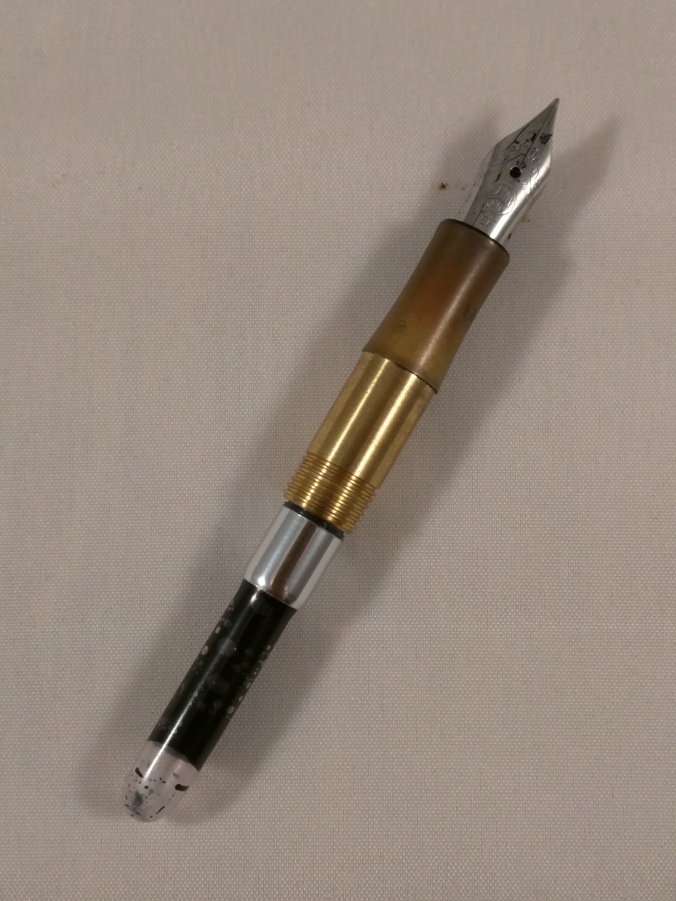 The small volume and softness of the bulb make it very difficult to fill completely by compressing the bulb.  The photo above shows the best result I managed to achieve.  I haven’t measured precisely how much ink I got into the pen, but with what’s in the feed I suspect it’s about what you would get from using a cartridge.

I don’t have a syringe/needle set-up, but if you do it may be an easier route to filling the converter.

For a first outing I inked my brass Liliput with some Diamine Twilight that I got as a Christmas present.

Using the converter in anger

It’s hard to get too excited about an ink converter, but as someone who has used a Liliput for the last few years, it’s great to know that I can now use my favourite inks in this pen and no longer have to settle for the restrictions imposed by having to use cartridges.

This is the point where I’d be wrapping things up and recommending that, for the sum required to buy one of these, it’s a no-brainer to do so.  If you want a full size pen with a big ink capacity, look elsewhere.  If you’re a fan of the Liliput, it’s pretty much a must-have.  Coupled with the news that Kaweco are issuing a clip for the Liliput, things are on the up for this pen.

This review then became a little more rose-tinted.  Read on to find out more…

As I mentioned, for my first use of the new converter, I inked my Liliput with Diamine Twilight.  It was the first time I had used this ink and I have to report I like the colour and the way it behaves in getting from pen to page.

As I was taking photos for this review of the Liliput converter, I discovered that this ink and converter seem to have a very special relationship.  Around 24 hours after first inking the pen, I opened it up to find that the material that makes up the bulb had turned an interesting shade of pink!

I emptied the pen and flushed it thoroughly with water to find that the pink colour seems to be a permanent fixture.  I contacted Cult Pens, (who I’d bought it from) and they haven’t had any other reports of this.  They kindly sent me a free replacement,though, and have passed my photos on to Kaweco to see if they have any thoughts on the subject. 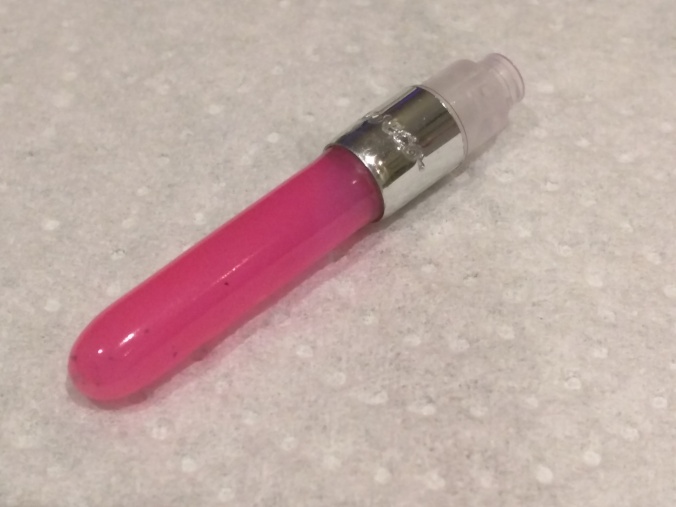 As this was the first time I had used Diamine’s Twilight, I didn’t have much to go on in terms of the ink’s properties.  Some quick and dirty chromatography identified a dye in this ink that looks a pretty close match to the colour of the converter.  It seems the two have ‘bonded’ in some way.

I’ve emailed Diamine to see if they’ll tell me what this dye is, but as yet, no response.

As far as I can tell, the bulb of the converter is as soft as it was before, so no obvious change in physical properties.  I haven’t had a chance to try washing it with anything other than water, but will try to get hold of some alcohol or acetone to see if that shifts it.

I’ll try the replacement that I was sent with some other inks to see if I get any similar reactions.  It would be nice to hear back from Diamine as to what the troublesome dye is, but I’m not holding my breath.

I have to say I’m enjoying the opportunity to turn detective, even if it is only in a small-time way.  It’s certainly a curiosity that I’d like to get to the bottom of!