I was going to call this a review, but since it lacks the sort of details that you might expect to find in a review, I’ve gone with something more mundane.

If you have any interest in fountain pens, you’ll have heard of Pelikan.  Some people collect Pelikans to the extent of obsession, owning every regular and limited edition going.  There’s even a collective noun for them – a flock.  (If you want chapter and verse on Pelikan pens, you could do worse than to start with the excellent Pelikans Perch).  I could always see why people liked them – a strong pedigree, well made, (mainly) gold-nibbed and piston filled, but for me something about them never quite clicked.

That’s changed a little in that I now own a Pelikan – an M400 White Tortoise.  Even that wasn’t entirely straightforward…

On the one hand, photos of the green tortoiseshell that makes up most of the barrel of this pen were intriguing.  On the other hand, “everyone” (whoever they are) says that the M400 is too small and any right-thinking person would start at the (larger) M600.  One of the reasons for going to the Bristol pen show back in February of this year was to be hands on and get my head round the relative sizing of Pelikans.

All of this combined to confirm that, despite the looks of the White Tortoise, I shouldn’t buy it.  It was too small and didn’t look right in my hand.

Since I didn’t much like any of the options in the M600 range at the time either, it left me concluding that about the only Pelikan I could consider buying was the M805 Stresemann.  Perfectly rational, but the price meant that it got put on the long list of pens to buy one day, rather than anytime soon.

So far, so logical.  But despite this, I couldn’t quite get the White Tortoise out of my head.  Fast forward to the summer of this year and an unfortunate combination of circumstances trampled logic into the dirt, turned and blew a raspberry in its dusty face and led me to buying the same said White Tortoise.  The lure for this particular ambush was set out by Anthony from UK Fountain Pens, who posted a photo on Instagram of a White Tortoise he’d just bought.  The trap was then sprung by Cult Pens, who had the nerve to offer 10% off an already competitive price and throw in a free Pelikan case.

My already non-ferrous will collapsed at this and I gave in to the inevitable and pushed the button.

It was hard enough resisting the pen, the prospect of a free case tipped the balance…

The one thing that photos of pens and even picking them up un-inked can’t tell you is how they will write, and this for me has been the revelation with the White Tortoise.  I have lots of pens that give me pleasure to use, but I own a far smaller number that you feel just “want” to write.  My new Pelikan is one such pen.  The nib is unbelievably smooth, inks flow ridiculously well and actually it feels pretty good in the hand. 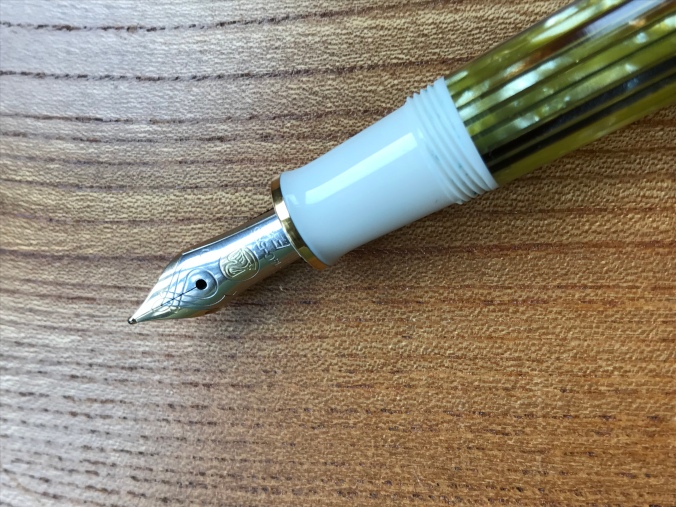 View from the sharp end

My first outing with it involved inking with Pilot Iroshizuku Kon-peki, a long-time favourite both for colour and for ease of use.  I was wary of anything that might stain the barrel and ruin the looks of the White Tortoise, but Kon-peki has always proved easy to clean out.  This highlighted one “issue”.  With an ink that flows well, output from the nib is so high that the fine nib I bought looked more like a generous medium.  Not unmanageable, but not quite what I wanted.  I’ve since tried some “drier” inks and things are definitely more to my liking with this change.

It still tests the definition of what I’d call ‘fine’, but I can happily live with that.

I was reflecting recently on one of the first posts I wrote on this blog about the Conklin Duragraph and how I realised that initial troubles I had with that pen were due to the poor flow of the ink I was using – Diamine Silver Fox.  Now I haven’t touched this ink since that fateful trial, but I wondered whether my new Pelikan could be elevated to the status of miracle worker and get something useful from Silver Fox.  It turns out not, but I won’t hold it against the White Tortoise and Silver Fox will just have to forever remain on the inky equivalent of the naughty step.

Back to the White Tortoise.  Since I’ve had it, only a couple of days have gone by when it hasn’t been inked and it continues to be a source of joy and pleasure.  It’s made me realise that Pelikan might know something about pens after all and “made” me put my name on the waiting list for the soon-to-be-released M600 Vibrant Orange.  That is an M600 I could really like.

I suppose I’m meant to draw some kind of conclusion out of this.  Aside from the obvious “Pelikan pens are not what I thought they were”, there’s the wider realisation that “monkey see, monkey want” is not all there is to this wonderful world of fountain pens and all that goes with them.   Sometimes a longer courtship, coupled with denial and, ultimately, ignorance of reasoned argument is required to make you really appreciate what’s in front of you.

Also, temptation from enablers and discounted prices are a wicked (interpret that how you will) combination.